Winifred Godfrey will have a solo show of her Mayan Procession

Posted by madebygirls at 6:10 PM No comments:

> Join Us for a Discussion of the National Arts Index on March 3.

Posted by madebygirls at 5:56 PM No comments:

Learn to create seductive surfaces for paint skins and grounds. Using your digital printed images, we will then layer and texture to make rich “painterly prints” . Work with Golden paint specialist, Sandie Bacon as she answers your questions about the vast array of Golden paints, gels, mediums and digital grounds. Step by step instructions as well as experimental techniques are offered. All paints supplied by Golden Paints. Valley Ridge Art Studio, 1825 Witek Rd, Muscoda, Wi., (608)943-6412, http://valleyridgeartstudio.com

Posted by madebygirls at 3:05 PM No comments:

As Sonnenzimmer, Nadine Nakanishi and Nick Butcher have created screen printed posters for clients as varied as Throbbing Gristle, Andrew Bird, The Newberry Library, and Human Rights Watch. Using a mixture of chance abstraction, modernist typography, and representational imagery, the duo has developed a unique aesthetic that pulls from various movements in art history while remaining distinctly forward thinking. Vorab Fabrik or “Beforehand Factory” is the duo’s first exclusive solo gallery show focusing on their non commissioned art work. Pulling from such influences as minimalism, arte povera, and abstract expressionism, the two are making work that forgoes the functionality of the poster yet retains the graphic quality found in their commercial work. Vorab Fabrik features an interactive sound installation, a drawing piano, paintings and so much more.

There will be lots of beautiful art for sale so don't forget your roll of cash! Fear not, we take credit cards too.

For more info about the artists go to:

Posted by madebygirls at 11:59 AM No comments:

Historians frequently assert that women artists fared better in Chicago than New York or Los Angeles. Despite this perceived reality, many women participated in collaborative groups, such as women artists’ art associations and cooperatives in order to create greater visibility for themselves. This presentation will examine this history, as well as the reasons why they chose to forge these alliances in a city well known for its warm reception of female artists.

Joanna Gardner-Huggett is an associate professor of history of art and architecture at DePaul University where she specializes in 20th century art and feminist art and activism.

Posted by madebygirls at 11:45 AM No comments:

Just some casual pictures--from Nancy Charak....
Posted by Anonymous at 11:51 AM No comments: 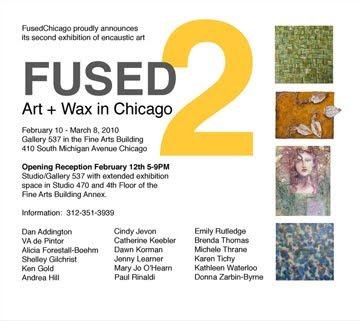 Posted by madebygirls at 7:27 PM No comments: